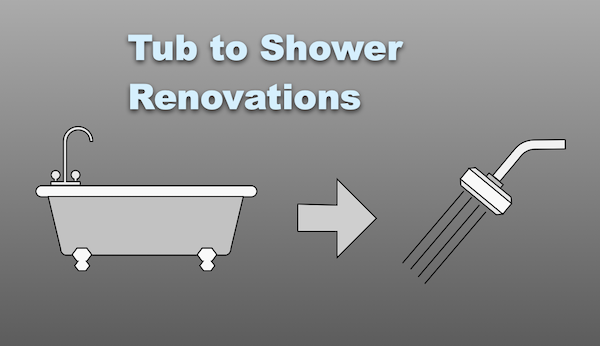 Habitat for the past three years has sought to address a need for safety among elderly individuals and individuals with disabilities.  Many elderly or disabled individuals are unable to safely bathe due to their inability to be able to step over a tub to take a shower.

The grant monies that have been received come from the McKee Foundation, The Anderson Foundation, Bank of America, BBVA Bank, El Paso Electric Company, Isla Carroll Turner Foundation, Rotary Club of West El Paso, State Farm Insurance, and the Texas Foundation. The total funds received this calendar year totaled $78,500. Habitat expects to receive an additional $5,00 from UPS before the end of the year. Through these grants, Habitat was able to do 13 tub to shower projects, and expects to do one or two others.

The Anderson Foundation provided $10,000 which was used on two tub to shower projects, one for a 77 year old man with disabilities, and the other for a 84 year old woman whose husband just died.  The Carl C. Anderson Foundation funds programs for low-income elderly and disabled individuals.  Its purpose is to enhance the quality of life for elderly and disabled individuals. This is the first grant that Habitat has received from the Foundation.

The funding enabled Habitat to do a portion of tub to shower renovations for the eighty-two-year-old woman whose work was also funded by the McKee Foundation. It provided all of the funding for an 83-year-old disabled man who lives with his wife. In addition, it funded the modifications for an 88-year woman who lives by herself and all the work for a 77-year-old woman with disabilities, who lives with her grandchildren. Part of the repairs for an 81-year-old disabled woman were also funded. The modifications to that home included removing and enlarging door to both her shower and her bathroom, so she could easily use her wheelchair.

This is the first grant Habitat has received from BBVA. The donation of $5,000 helped fund most of the renovations the disabled lady which was also funded by Bank of America.

The McKee Foundation donated $8,500.  This is the second donation from the Foundation.  The funds were used for tub to shower renovations for a 62-year-old woman, and for a portion of the project for an 82-year-old woman who lives with her son.

For the past three years the Isla Carroll Foundation had donated substantial sums to Habitat for the Tub to shower renovations.  The purpose of the Isla Carroll Foundation is primarily to assist elderly individuals. The grant of $10,000 this year funded the modifications for enabled Habitat to do the renovation for 78-year-old woman who lives alone. It also partially funded the repairs for the 82 years old woman which was also financed by the McKee Foundation.

Many of Habitat’s Board members are also members of the Rotary Club of West El Paso. The Rotary Club donated a total of $3,500, which will be used in conjunction with the grant from State Farm and the grant to be received from UPS to fund one other tub to shower renovation.

This is the second year that State Farm Insurance has contributed to the Tub to Shower program. They awarded $4,851.50.  The funds will be used along with the money from UPS and Rotary Club of West El Paso to fund one to two more projects.

This was the first year Habitat applied for a grant from the Texas State Affordable Housing Corporation. Habitat received a Texas Foundations Grant from them totaling $18,500. Since Habitat has been approved for a two-year grant cycle, it will also be eligible for an additional grant next year. The Texas Foundations grant funded three projects.

A 61-year-old single mother who is battling cancer.

A 62-year-old man who lives by himself.  Due to a motorcycle accident when he was 16 years old, he has disabilities that require him to walk with a prosthetic leg. Getting into a bathtub with only one leg was a challenge since for most of his life he did not have any grab bars. Getting in and out of the tub was even more difficult due to a curvature of the spine, and he could not hop on his one good leg because that leg had a shattered ancle from the accident. Only recently did he add one grab bar above the tub. The additional of a folding seat attached to the wall and grab bars on three walls now enables him to safely use his bathroom for bathing.

In hi own words, he expressed what this means to him:

“Adapting to life after a disability can be a challenge, yet it is a necessity. The things that we once took for granted, can no longer be accomplished with prior ease. Take for example, bathing. In my case, being a below the knee amputee with a weakened damaged ankle also, made taking a bath, or a shower difficult from a safety standpoint. It’s not as if wearing my prosthesis in the tub was even an option. Water can severely damage a prosthesis, and while wrapping a plastic bag around it may sound good in theory, it’s still not the solution. With balance being another issue, standing on one leg in the shower while leaning against the wall is at best an act of futility. Sitting on the edge of the tub to enter or exit a slippery surface made me extremely overcautious as well. As I became older and somewhat wiser, the use of a shower chair became a common practice but climbing in and out of the tub still unnerved me. I feel fortunate that of 36 years in my residence, I only fell in the tub once. Shortly after that occurrence I installed a grab bar which added to my peace of mind. Then, the absolutely best possible thing happened. An application that I had sent to Habitat for Humanity’s Bathtub Conversion Program was accepted and the Restoration began shortly thereafter. The Roll-In Shower with Grab Rails, a Folding Shower Seat, Non-Slip Tile, Center Drain and Handheld Shower were installed very professionally. A new Chair Height ADA Toilet was also installed adding to my secure feeling. The icing on the cake, was a new vanity and sink, completing what I call my “New Spa Experience”. I can’t begin to thank everyone enough for their blood, sweat, and tears in making all of this possible.”

A 79-year-old man who lives with his 71-year-old wife. He has had two strokes, and at times found himself with balance issues while taking a shower.  He has a bad back and an injured knee which made it exceedingly difficult for him to get in and out of a bathtub. His wife also has disabling conditions that made it difficult for her to get in and out of the tub, due to arthritis and bad knees.

Habitat received $5,000 in December from UPS Foundation. The funds will be used along with those from State Farm and Rotary Club of West El Paso to fund one or two projects.